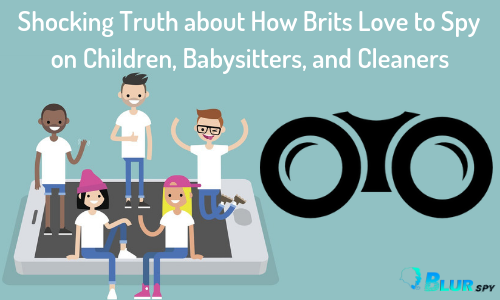 The Shocking Truth about How Brits Love to Spy on Children, Babysitters and Cleaners

There is no denying that a lot of people their children. People all around the world are monitoring their children, kids, and employees. But when it comes to Britain, they are high obsessed people with monitoring and tracking others. The people in the UK love to use the latest technology to track their kids as well as babysitters. The trend is growing and we will talk about it in the next paragraphs.

According to Forbes, this is appreciative and the bright side of technology that it lets us track anyone.

The researchers believe the security systems, surveillance cameras and other tools used for monitoring are very effective and can send you on-time alerts or notifications when there is an emergency. And this is something that we should take seriously. Our child can be in trouble and we can reach them for rescue on time.

The research finds that more than 2 million people in England are monitoring others without informing them.

The obsession of the English with the latest use of technology for monitoring is known to the world. But the real issue is the majority of the people is tracking others, like the kids and teens, without their consent and approval. The researchers further added there are a huge number of other people, around 12 million, who don’t track anyone yet. But they are planning to monitor people with their devices.

Four million parents in the UK are tracking their kids without their knowledge.

The same study also found out that out of 12 million people, 8 million people are planning to keep eyes on their kids with the latest devices and technology. The interesting thing is the majority of these, around 6 to 7 million, will track kids in future without informing them.

According to the experts, this kind of monitoring and tracking is creating serious issues. Parents are spying their kids without their knowledge. We can’t expect anything good if the children find out their parents have been spying on with apps and other tools. This will create even more issues in parent-teen relationships. So this needs to be addressed carefully.

The spying app cannot be detected. But they create noise during calls and this makes the phone user doubt it.

However, the experts believe the spy app work in a way that the users cannot find out about them. They work in the background and make it pretty difficult for anyone to detect. But these apps cause noise during calls. They also drain the battery quickly. These things create doubt among the target device users and they can somehow find out about these apps.

Not just kids and teens are being tracked, people also monitor the employees.

The studies show that monitoring is not just limited to the children. They believe the kids are the first target to use the tracking devices. The next person in the line is an employee. Majority of the people say they don’t believe people around their kids. For this reason, the cleaners, as well as babysitters, are widely tracked and monitored. 43% People track their employees without their consent.

This is seriously a huge problem for the people. If you monitor anyone without their consent, this can create a legal issue for you. The person who is being monitored would like to take legal actions if they know about it. At the workplace, this can be even severe. The employees want to be clearly informed regarding what kind of data will be collected.

Employers can face legal issues if they track employees without their knowledge.

Similarly, employers who fail to ensure or maintain transparency in data collecting and tracking employees can face legal cases. This is a clear violation of basic human rights to track down the staff without their knowledge. The federal, as well as state laws are clear about employee monitoring. According to the laws, anyone who is tracked or monitored should be notified about what kind of data is collected.

The surveillance system and video cameras at home are fine. But there should also be transparency in data collecting and to what extent the staff is monitored. Employers should be careful in this regard. This is also a warning of parents who monitor kids without informing them. The partners should also think about informing their spouses when they monitor them.

There is no denying of the fact that many people in the world spy on their kids and employees. But Britain’s obsession with spying and using latest technology is far away from what we can’t imagine. Parents are excessively tracking their children. Employers are also keeping eyes on the employees like babysitters. They don’t trust anyone so they want to make sure their kids are safe.