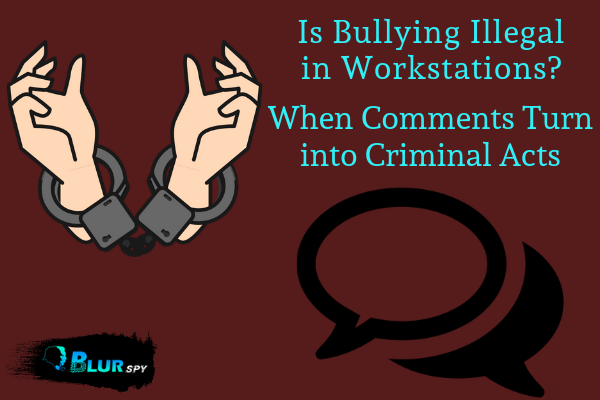 Is Bullying Illegal in Workstations? When do Comments turn into Criminal Acts?

We are witnessing a new culture and tradition of bullying in the workplace. A lot of people have suffered from this menace and many quit their jobs after they were bullied too much. It is a serious and challenging issue that needs immediate attention. People who are bullied do not only lose confidence, they sometimes commit suicide because of the pressure and the consequences bullying brings with it.

For many bullies, it might be fine and fun to pass comments, troll the new staff members and colleagues. But you have no idea what people are going through. Everyone has a painful struggle story that can make anyone scared if it is shared. And if in such cases, a person who has just got the job is bullied, will prove disastrous. Company reputation is ruined and people are fired. In this blog, we will look into some alarming stats on workplace bullying, the reasons why people are bullied at the workplace, and what can be done to cope with this challenge.

Statistics on Bullying at Workplace

Before we talk about the reasons for bullying, we should check some important statistics on workplace bullying. These facts and stats will help us understand the issue in more depth. For many, it will become clear how, why and what kind of results it comes with. Let’s explore the stats.

From the above stats, we can see a lot number of workers have to face bullying at the workplace. Even the majority are affected by this problem. Another point was worth noting and that is 54% of people continue to bully for more than five years. This is the worst thing. It also shows it is really hard to quit bullying and let others live peacefully. At the workplace, bullying is used as a major tool to sabotage someone’s work and reputation.

Here are even more stats and facts.

It is not hard to come up with some conclusions and finding based on these stats. The first alarming fact is that women face bullying more than men. In other words, women also face bullying and harassment. In half of the cases, bullying leads to mental disorders in the workers. Companies have created their policies but the employers don’t know about them and cannot use the policies for their defense.

Reasons Why People Are Bullied at Workplace

Various studies have shown that people who are good at work, perform better than others, and become popular with their bosses are more likely to face bullying than others. It is a big reason which shows the problem with the mindset of workers. People are not happy to see a colleague doing better and performing really well. When it happens, such a person is inevitably facing harassment.

There are many digital distractions in the workplace. But apart from this, new people face another sort of distraction. It has been revealed that newcomers are more likely to suffer from harassment and bullying challenges at the workplace. Usually, the seniors make fun of the new workers. If the new people get adjusted, they go a long way. But in many cases, the new workers quit the job and the purpose of seniors is completed.

Revenge or Jealousy from Colleagues

Many people are not aware of the laws and ethics of the workplace. They cannot see others doing better. It is in the nature of man to become an enemy to a person who performs better than others. This is what we call the jealousy feeling in the people. When such a thing happens, the popular employees go through bullying and a tough time at their job.

Apart from the reasons we have talked about, there are some attention seekers at every place. Such people want to get the attention of others. For this, they target the new workers, popular staff, and others for bullying. When it happens, their wishes are achieved. They start getting attention. Such people cannot quit bullying because they become habitual to it.

Company Has a Bullying Culture

Lastly, bullying happens at the workplace because of the companies. Yes, a lot of companies have a bullying culture. Like the boss bullied senior staff as well as juniors. The seniors do their best and take revenge on the others. This becomes a habit of every person and leads to the company culture. In many cases, companies are known for having bullying cultures.

When Comments Turn into Criminal Acts?

At the workplace, many people work together. In this case, the people respect each other and make sure no one feels hurt by what they do or say. That is why companies have policies and rules of the workplace. But in many cases, people make fun of others, crack jokes and it becomes normal. The friends at the workplace tolerate such things. However, for a lot of people, it is offensive and is considered bullying.

That is true, bullying is what we call this. When seniors make fun of others, talk to the juniors like they are the bosses, and crack jokes- it is categorized as trolling and bullying. The purpose may not be to scare anyone but it does so. People are scared when they are bullied. It is the worst thing that happens to anyone at the workplace.

It is important to note that people who are frank with each other can do such things. But they are not supposed to behave like this with new people and new colleagues. It will hurt them. Sometimes, people lose their confidence because they are bullied. Many companies have rules for this purpose. But the sad part is rarely anyone uses these policies.

Law Does Not Allow Workplace Bullying

This is for the information of the workers that the law is there to protect everyone’s rights. All people have the same rights. Bullying is considered illegal in most countries. For this reason, the government has introduced laws that declare bullying as a crime and offensive act. So if you bully someone and they get the proof, you will be in big trouble.

Companies and particularly, the bosses should play their role when it comes to reducing bullying at the workplace. Various options can be used in this regard. We are going to talk about the ways and solutions on how people can cope with workplace bullying.

Ways to Deal with Workplace Bullying

Dealing with bullying is really important. Below are some of the practical suggestions that will go a long way in this regard and protect people at the workplace.

First of all, the bosses should show responsible behavior. They need to be careful and keep vigilant to see if someone is bullying others. Such things and practices should be discouraged. It will set good examples for others.

Bullies Should Be Punished

Secondly, the companies should have policies. If anyone is caught bullying others, that person deserves punishment according to the law and policies. This punishment will warn others and no one will dare to bully anyone in the future.

Lastly, bosses should use reliable and perfect employee tracking software like the BlurSPY app. It provides great support when it comes to monitoring workers, protecting people from bullying, and improving workers’ productivity. BlurSPY is the ideal solution to curb workplace bullying and make your staff feel relaxed.

Workplace bullying is dangerous. It happens due to multiple reasons. But the employees are not aware of bullying rules. Bosses should play their role by staying vigilant, punishing the bullies, and using the BlurSPY app to deal with this.