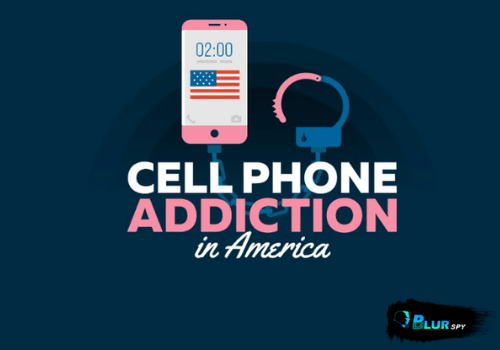 Cell phone addiction is harmful. Without any doubt, it can be said that the majority of the new generation is cell phone addicted. It will be alarming to learn that on average, a person spends 3 hours and 8 minutes on the cell phone every single day. The trend throughout America is same and a study reported that average user time on the cell phones in 3 and half hours- 3 hours, 30 minutes.

The Shocking Facts and Statistics

Considering the above-mentioned duration of every user on their devices, the same study found out that every person checks the smartphones 110 times every single day. 40% People use their phones in toilets whereas 12% check the phones during showers. These facts and stats prove how cell phone addiction is growing with the passage of time and where the future generations are heading to.

More than 50% of American teens feel addicted to smartphones

When it comes to teens and kids, the situation is even worse. Adults can make better decisions and understand how harmful it can be to spend so much time while using smartphones. But kids don’t. The study found that more than 50% of kids in America have reported being addicted to smartphones. Even 70% of kids have argued with their parents regarding the use of cell phones. That means kids and teens don’t like when they are advised to reduce the use of cell phones.

As we try to understand the use of smartphones among the kids, we learn about even scary things. More than 77% of American parents know their kids are distracted due to cell phones or other devices like tablets monitoring when they are with their families. The cell phone addiction is disturbing the family life of teens as well as their parents. Shockingly, it is reported that 26% of car accidents in America are reported to be due to cell phone use.

56% of Parents confess checking their phones while driving

1 in 3 People will give up sex than their smartphones

There is no denying that smartphones have become an integral part of our lives. Whether we eat, drink, drive, sing, go to toilets, take a bath or even have sex- we use smartphones during all this. It is interesting to learn that 1 in 5 people between the ages of 18 and 34 have confessed using in mid of sex. However, a third of smartphone users are ready to give up than their smartphones.

61% of Smartphone users sleep with their phones under the pillow

51% of people are those who continuously check their phones when they are on vacations while 44% of these pretend to check the business emails on vacations using their phones. 50% Users reported they feel uncomfortable if they forget their phone at home whereas 44% were those who said they would experience a great deal of anxiety if they lost the phone and it could not be replaced within a week.

Summarising the Stats and Facts:

The stats and facts on cell phone addiction highlight a number of serious and major issues. Parents should do the following things as we recommend on the basis of the finding of the research.

Restrict Phone Use in Teens

The first lesson parents can draw from these facts is that the use of phone should be restricted in the kids. 26% of road accidents are due to cell phone use. It says everything and most of these is kids and teens.

Encourage Kids for Sports and Games

The second and most important lesson is that parents should reduce the use of cell phones and encourage their kids for healthy and better activities. Sports and outdoor games are the best options in this regard.

Be a Role Model for your Kids

The study showed that 56% of parents confessed to using cell phones while they were driving. It is a serious mistake on the part of parents. What they want to teach their kids? It needs to be stopped. First, the parents must set examples for their kids and then recommend their manners.

Lastly, the parents should use BlurSPY app, which offers the best screen recorder, social media hacking tool, phone monitoring, and other options, for keeping eyes on their kids. This parental control app is the best and can help parents monitor their kids in better ways.

BlurSPY is an ideal option for the parents. It comes with a good number of essential features which make kids monitoring an easy job for the parents. With the regular use of BlurSPY app, parents can prevent cell phone addiction in their kids, improve their health as well as protect them in better ways.