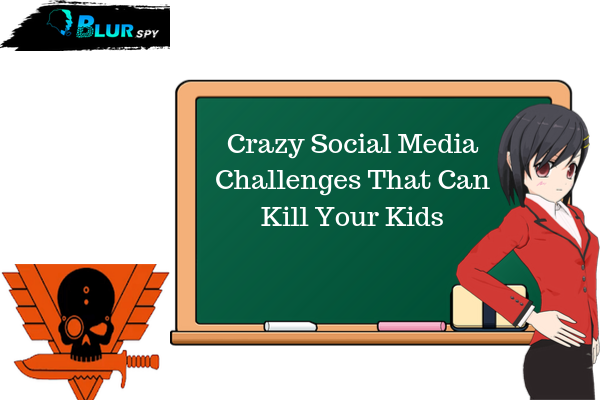 Social media was introduced in order to allow people to stay connected with one another. But when we look back and compare it with the current times, we see a huge difference between the purpose and the way social media is used. People have gone crazy and they converted social media into something which is their life and death. Kids are the most addicted age group.

These days, social media is widely used around the world. In recent times, a weird change has been noticed on social sites. People have turned to absurd challenges which are tricky, life-threatening as well as dangerous for everyone. We have created this blog post on how some of the craziest challenges are the favorite stuff of your kids on social media and how these can kill your teens.

The Blue Whale challenge is so notorious that half of the world knows about it. Many children, as well as young people, lost their lives while performing many other challenges like this one. So it is important for the parents to keep eyes on their children, monitor their phone use, and check what kind of activities they do on the social media platforms.

In the current times, we have witnessed a number of serious things going on on social media sites. Kids have developed many harmful habits like using smartphones while eating, carrying out social media challenges, and risking their life by using apps such as FaceApp has threatened their privacy of the kids. Among the many weird things, challenges are also common. Below are some of the most dangerous challenges that kids should not perform at all.

This challenge takes the first slot in our list because of its deadly lethal nature. Blue Whale has introduced two years ago and became an instant hit. Millions of people installed and played this game. As the user plays, it gives serious challenges to the users like drawing a whale on the body with a knife, waking up at 3 AM, and escaping the house. The last challenge is to commit suicide to end the game. This is literally so insane.

Fire challenge is the next dangerous thing that has attracted a huge number of teen boys and girls. Parents have no idea of what their kids are up to. Due to social media use, kids try to eat fire and end up in disasters. Their mouth, as well as internal body system, is heavily damaged. They do all this in order to capture a video, share it on social media and get few likes. Is not it insane?

Erasers are commonly used in schools and some insane people have used this as a challenge. Kids are urged to use an eraser to rub the skin of their body with it. They will keep doing this until the heat is produced and the skin is removed. It gets painful as the challenger continues to do. But the more pain you bear, the more you are appreciated. It can seriously prove lethal for the school kids.

You might not have seen anyone drinking Sprite after eating bananas. But this has been turned into a crazy challenge for the kids and teens. According to this challenge, someone has to eat half a dozen bananas and then drink one liter of Sprite soon after it. It is not possible to digest bananas with a cold drink. Furthermore, the science says the chemical reaction can go wrong leading to the death of the challenger.

UV rays coming from the sun are extremely dangerous. People use sunburn creams and products to protect their body when they go out. But there are people who expose their body to sunlight intentionally. Why? Just because to perform a challenge. This new task asks the teens to expose a certain part of their body to sunlight and let it burn until there is a color change of the skin. It can cause cancer as UV rays are pretty dangerous.

Parents Got to take it Really Seriously

As we have talked about some of the worst challenges on social media, it becomes important for the parents to control their children and not let them do such crazy things. None of these challenges is safe.

It becomes pertinent that parents should monitor the internet, social media, and phone usage of their children. With the help of the BlurSPY Android spy app, they can check the apps and games installed on their kids’ phone, what kind of things they do on the social media and how they are ruining their lives. This app offers many useful features like monitoring phone usage, tracking social media, checking apps installed, games the kids play, and their internet history.