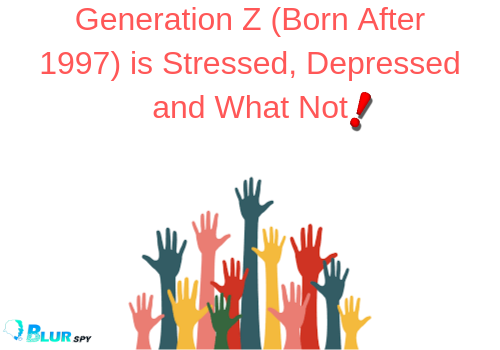 Generation Z (Born After 1997) is Stressed, Depressed and What Not?

A new study at Pew Research Centre has found out that stress and depression are the leading issues of generation Z, those born after 1997. This generation is social media and internet obsessed. The same studies also found out these people are more alone than any other generation on the planet these days.

The research conducted an interview over 1000 American teens and young people. People born after 1997 are now almost 22-year-old. They are not teens or kids anymore. They have become young. 70% of these 1000 people said that anxiety and depression are the major concerns among them. Moreover, teens from poorer families had more attitudinal issues.

What remained constant was the mental health issue. No matter which family a person belonged to, their mental health is becoming poorer with the passage of time. Depression and anxiety have become the top problems that they want to get rid of at the moment.

When it comes to the reasons and causes of why these problems are on the rise among this age group, the study found that social media was the major cause. It learned that social media has isolated teens and kids from their peers and friends. They now feel lonelier and want to spend time with friends. As they are alone, stress and depression are taking over them.

The same side of the research also reveals that a huge number of people, nearly a fifth, just in the US are living with mental health problems. This issue of depression, stress and anxiety are on the rise since 1950. But the generation Z got its worst effects after everything else coupled with social media.

Anxiety disorders cause the global economy $1 trillion each year

Mental health issues are not just in the USA. They are everywhere. People of generation Z throughout the world are really stressed and obsessed with social media. According to the World Health Organization, anxiety disorders cost more than one trillion dollars to the global economy. The global expenses on anxiety and depression show the issue is too serious and should be handled immediately.

It is also important to note that stress and anxiety are not the only problems of this generation or the people born after 1997. The study conducted also asked the interviews to list their other issues. It found out that this generation is also facing a number of other problems. Some of these are listed below:

What Does the Research Suggest?

Secondly, the study suggested that parents should be more careful about their children and teens. There should be an increased focus on their technical education, skill development and making them able to secure jobs as poverty is one of the problems too. Generation Z is more educated but poorer than their elder generation.

Third, drug and alcohol addiction are also the top issues this generation is facing nowadays. Most of the teens and kids start drugs due to lack of parental control, domestic violence, unrest at home and when their parents don’t care about their kids. Parents should keep eyes on their children. They need to see if their kids are taking drugs and take measures to prevent it.

A lesson for the Parents:

This new research has made the parents more concerned about their children as it highlights an important issue. Parents need to spend time with kids, watch them all the time and know about their activities. Social media addiction needs to be dealt with iron hands.

In this regard, BlurSPY will be an ideal option for the parents. With this parental control app, they will be able to spy on teens, know social media stuff, sneak into their phones and see what they have been doing. The app offers parents with a wide array of advanced features like social media hacking, screen recorder for instant messengers, multimedia tracking and phone history.

People born after 1997, generation Z, has some serious issues. Parents can play the best role in this regard. With the use of BlurSPY Android spying app, parents can deal with their kids, prevent social media addiction and reduce stress in their teens.