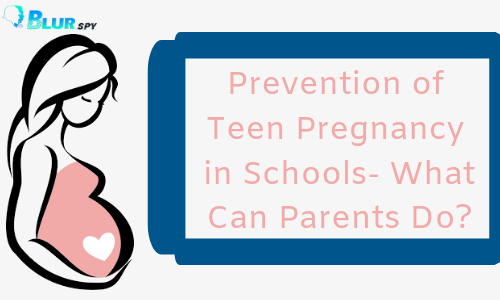 Prevention of Teen Pregnancy in Schools – What Can Parents Do?

The parents nowadays are faced with some serious challenges. Smartphone and internet addiction among teens, cyberbullying of teenagers, social media stalking, teens lying about their whereabouts, drug addiction, and many others. But there is something even more serious and challenging for parents and that is teen pregnancy.

If a teen is an internet or drug addict, parents are not ashamed about it at all because this can be fixed. But when a teenage girl gets pregnant, parents really feel ashamed and low because they can’t face other people around. Some families manage to hide teen pregnancies but some can’t. Only parents know how hard it is to deal with such cases.

Stats and Facts on Teen Pregnancy

Before we talk about the reasons and prevention strategies, it is imperative to understand some facts and stats. These numbers will just blow your mind away from how teens are getting pregnant without their wills.

These stats and facts are not only shocking but alarming as well. We have learned several things from these facts. The most important thing was the miscommunication between parents and teens, not keeping eyes on teens. This has been quoted as one of the main reasons why teens get pregnant at schools.

Another shocking thing to learn was that teen girls who have partners elder than them are more likely to get pregnant. In this matter, there is a need for great focus and attention. Parents have to take care of this. We will talk about it in the prevention strategies as well.

Last but not sure least, more than 40% of teen girls become pregnant before they turn 20. This also shows that parents can prevent it during the early age of their teen girls. If communication is maintained and the teens are given due love, this will help in preventing teen pregnancies.

Understanding the reasons and causes of teen pregnancy is more important than preventing them. When the parents will know how and why teen girls get pregnant, they can take better steps in this regard. Even they can prevent it before pregnancy happens. So let’s learn about the reasons.

Drugs and Alcohol Are Primary Reasons

There is no denying that teens try and consume drugs as well as alcohol at schools and parties with friends. They don’t realize what is coming next. They have sexual relationships with friends or partners and end up getting pregnant when they don’t use protection.

Peer Pressure is Another Reason

Peer pressure here can be described as when teen girls are forced into sexual relationships by the elder boys. At parties and schools, this often happens. The boys elder than girls make relationships with them and force them for sex that results in teen pregnancy.

Yes, there are many girls out there who get pregnant when they are raped by someone. Rape is a serious problem in every society but the teen girls face at the end. In rape cases, teen girls have no accountability but the real culprits are people who play with young girls.

We have summed up the major causes and reasons for teen pregnancy. The reasons actually have lessons for parents and how they can deal with teen pregnancy. Below are the few options that can be really handy when it comes to the prevention of teen pregnancy at schools.

Have the Sex Talk

People think this is really weird to talk about sex with your daughters. But the experts believe this is one of the most effective ways to deal with teen pregnancy and even prevent it. Tell your teen girls about sex, how it can be enjoyed in a safe way and what they should take care of if they are having sexual relationships.

Another thing parents should do is to encourage safe sex when it comes to the prevention of teen pregnancy. Safe sex refers to the use of protection as well as contraceptives. Teen girls should be educated about the use of pills and how they can make sure not to get pregnant without their will.

Use a Parental Control App

Many parents shared their teen girls are not cooperative at all and don’t share their problems with parents. Such teen girls can be better handled with a parental control app. Parents should use BlurSPY to keep eyes on their kids.

This app offers a number of useful features like tracking phone calls, checking text messages, tracking location with GPS tracker, monitoring social media, spying on instant messengers and getting access to the multimedia files. These things when known to parents will help in the early prevention of teen pregnancy.

Teen pregnancy is a growing and serious challenge for parents. But parents should communicate with teens, monitor them with parental spy and know about their whereabouts as well as online activities to prevent teen pregnancy.

This generation finds love by swiping left or swiping right. The technological expansion has made access easy to everything... read more