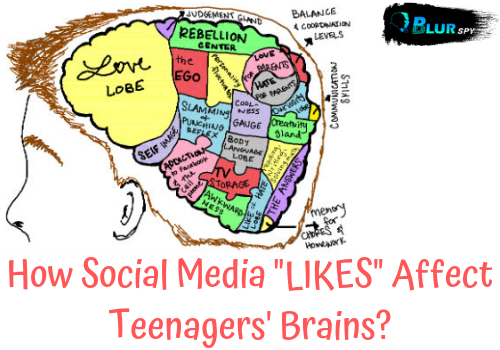 Have you ever wondered why people prefer social media photos or posts with more likes? Many of you might have and teens or kids are also included. It is interesting to learn that it is not accidental but an organized activity. A new study published in Psychological Science, a journal, shows that social media LIKES have a huge impact on the teens’ brains.

The study included over a hundred teenagers of 13-18 years of age.

The researchers interviewed more than 100 teenagers between 13 and 18 years of age. Teens were given photos of different items. Some of them included their own photos with different number of LIKES from their friends as well as strangers. Every kid was given 12 minutes to view the different photos and their brain activity was monitored using MRI.

As kids saw photos with more likes, there was an activity in various parts of the brain.

Researched noted that as the teens were given photos, they noticed a higher level of activity in some parts of their brains when they viewed their photos with more likes. The area spotted in the tests was called nucleus accumbens. This part of the brain is highly sensitive during adolescence. The researchers also observed activism in another part of the brain which is called a social brain.

It was also interesting to experience that teens more impressed with the photos with more number of likes. For this reason, the region of their brain which is responsible for decision making was the most affected one. This is the whole point the researchers wanted to make. In other words, social media LIKES influence the decision-making process in teenagers’ brains.

It inhibits teens’ brains from engaging in certain activities, like decision making.

The findings of the study were welcomed by the parents. A lot of other researchers and psychologists endorsed the study. They all agreed that teens get a huge impact from social media and particularly LIKES. The more LIKES they get, the happier they are. And it also makes them make wrong decisions as they are influenced.

That is why generation Z is stressed, depressed and tenser.

Effects are alarming if we talk about the concerns of the parents. Everyone now wants to protect their children, make them healthy and grow in an easy environment. But the social media factor is worsening the situation for teens as well as parents. As time goes by, this habit of making wrong decisions becomes a norm. Such people, as they grow, are less passionate, more stressed and often make decisions without considering being realistic.

Parents may not be feeling well after reading this new study. And honestly, they should be worried as well. This research comes with a number of shocks and lessons for the parents.

The first and foremost thing parents should understand is that social media is not really safe for their teens. Despite doing a lot for the kids, their brain health is badly affected by the use of social media. Teens develop bad habits and their attitude is totally changed due to social media effects.

They are Not Good Decision Makers

Another lesson parents can derive from this study is that teenagers who use social media get affected in multiple ways. The region of their brain that is responsible for decision making receives the most impact. Thus their decisions are not intended but influenced. So we can say such teens are not good decision makers.

They May Become Bad Professionals

Nowadays, decision making is considered an important and must-have skill for every job. Robots are replacing humans. But if robots cannot replace humans in one area, then that is decision making. And if humans are bad at decision making, they will never get any job. The study demonstrated that such teenagers are not the best professionals as they lack decision-making skills.

Now the most important thing is what can be done in this regard. Parents should get serious about it. The findings of the study cannot be ignored as they are genuine and have been endorsed by a number of other researchers, psychologists.

With lessons for parents, there is also a dire need to take the right steps for preventing these effects in teens. Parents should guide their children about the use of smartphones, the internet, and social media.

Apart from this, parents need to use the best parental control app that helps them track the children. With BlurSPY app, the best teen monitoring software, parents will get all the best features they will need to track their children. This app will empower parents and let them restrict the use of social media among the kids.

BlurSPY provides you with the essential features for parenting like tracking text messages, checking phone history, monitoring social media use, using screen recording for hacking Android phones and others.

Social media LIKES to influence the social brain part of teenagers. With this impact, their decisions are influenced and they are poor at making good decisions. Parents with the use of BlurSPY mobile tracker app can restrict social media app and improve decision making in their kids.