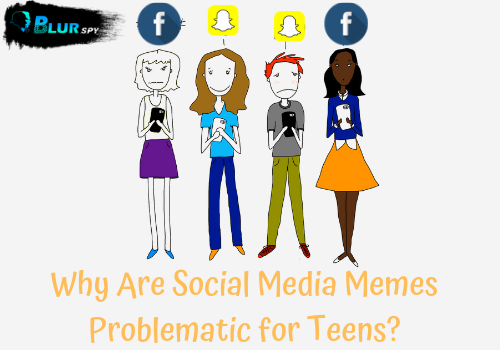 Why Are Social Media Memes Problematic for Teens?

The internet has offered us a lot of amazing stuff, new technologies and things we could just imagine about. The AI is just one example that how technology with the internet has changed everything. Among many products of the internet, social media one too.

There are many worse things about social media

Social media has become too popular these days. Every second person seems to be obsessed with social media. More than 4 billion people around the world social media site Facebook alone. When it comes to such sites, the content is the most important thing. It will be right to say that social media sites operate on the basis of the content they provide to users. As social sites don’t provide content themselves but the users do, so there is diversity.

The variety of content has also led to uncontrolled access to some stuff that should not have been there. You may have heard of memes and seen them. Internet memes are images which provide entertainment to the users. They relate to some situation which written content. People find memes funny because they are true but highlight the funny side of anything.

Why Are Internet Memes Popular?

Internet memes started a few years back and they will be hardly 5-6-year-old. But these days, the social sites and internet are stuffed with meme content. Even some entertainers earn from such memes. They offer entertainment and fun to their followers. People share them because they find them real.

Popularity and sharing of memes is never an issue unless they are fine. But we have seen the memes getting weird. People become racists, sexist, fascists, and extremists when they create memes for fun. They never realize how bad or damaging memes can be for people.

Why Are Internet Memes a Serious Problem?

The memes carry some message; bright or dark sides of the society, sometimes highlight important issues and at times are offensive. For kids and teens, memes are not suitable at all as they are reported to be offensive. A lot of kids and teens are meme addicts. They spend most of their time looking and searching for memes for fun and entertainment.

Troll through memes is a sort of bullying

Multiple studies have linked a relationship between memes and attitude problems in teens and kids. The memes are created for trolling purpose and it is considered a sort of bullying. When the teens and kids keep getting exposed to memes, they become trolls. Their attitude is that of the bullies have and it is really dangerous.

Memes cause attitudinal and behavioural problems in teens

As the memes are created, the creators know that they are getting racist and sexists but they ignore it. The continuity causes behavioural issues as the users don’t know what kind of damage they are doing themselves as well as to the people who watch such content. It has become uncontrolled and a lot of people create memes.

The use of memes is becoming unethical because of the nature of the content and the messages they carry. Anyone on the internet can mock others’ attitude, look, faces, behaviour and even colour. People target each other through memes and also expose the worst sides of their society and cultures.

What Parents Need to Do About Memes?

No parents want their kids to grow as sexist or racist. This sort of attitude is dangerous and spoils personality of a person. People easily spot if someone is racist or sexist. In this digital and technological era, people have become educated. Companies don’t accept people with such sort of behaviour.

Even social media screening is used to find the best people for a job slot. The screening can expose anyone. Even the friends of trolls believe they are offensive and should be avoided. For parents, these things can be serious. Teens need to be avoided from the meme content and whatever they view on the internet.

One way to deal with the issue is that parents should discourage the use of memes among teens and kids. Children should be educated on how dangerous and offensive the memes can be so kids should avoid them.

Apart from this, parents can also use technology to deal with meme addiction in their kids. Teens should be monitored for their social media and internet use. BlurSPY can be of the greatest help in this regard for all the parents who want to monitor their kids’ social and internet use.

The app provides great support and helps parents restrict the use of offensive content in their children. With BlurSPY app, parents can use screen recorder feature, social media monitoring, internet history tracker and other features to see what the kids watch and access online.

Memes are meant for fun and entertainment. But they lead to attitudinal and behavioural issues in the teens and kids. Children become racist, sexist and extremist. For this, parents should use BlurSPY Android spying app to monitor internet and social media use of their kids.