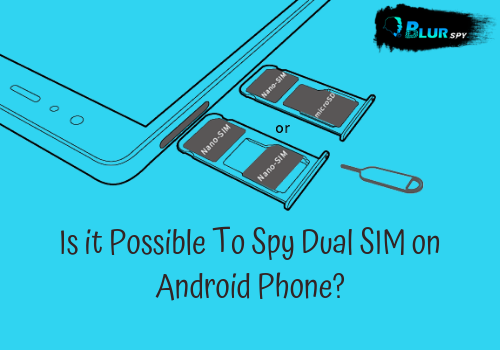 Is it Possible to Spy Dual SIM on Android Phone?

These days, most of the smartphones feature dual SIM support. It has become a need of the hour for many reasons. People prefer to use one carrier for making calls and the other to use the cellular data for their better coverage and improved internet speed. Another reason why some people prefer dual SIM support is some areas have poor coverage of one network and better of the others. So they are safe in such cases.

It has a good number of advantages for the users. Smartphone companies have also realized the importance and need for dual SIM. Apple recently added dual SIM support to its latest versions of iPhones. Users feel more satisfied, relaxed and know they will not be in trouble in the need of the hour.

But a question arises like what about the people who use dual SIM and how to track their phones. Is it even possible to spy on the dual SIM? The short answer to this question is yes. Anyone can use the spy app to monitor phone calls, messages, and other SIM activities on a phone carrying dual SIM. You will need to use BlurSPY app in order to monitor and spy on the android phones with this feature.

It should also be noted, there is no major difference when a phone has a dual SIM and you have to spy on it. The process is the same and all you need is the best and the most powerful spy app to track the activities. Make sure, you choose the right phone spy app otherwise it may not be really possible to track the dual SIM activities on an android phone.

The difference of Spying on dual SIM on Android Phone

Many users may have questions like what is the difference between spying on single and dual SIM on an android phone. The users should know there is no such difference. You will use the same features and options to track dual SIM on the target phone. BlurSPY offers dual SIM option so that the users can track all the latest smartphones and devices.

You will need to install the app on the target phone. Downloading and installation will be the same on any other phone with a single SIM. When the app has been installed, you will log in to your BlurSPY control panel with the username and password. It will take you to the control panel or dashboard section. Here you can turn on the relevant features like call recorder, text message tracker or other apps.

Here come the most important thing users should know and that is how to differentiate between the data logs on an android phone with dual SIM. On a phone with a single SIM, the users know which phone or person the data belongs to. But it can be a problem for Android phones with dual SIM support.

Users will not be able to differentiate between the data files. For example, if you have monitored the phone calls and recorded them on the target phone, the app will not show which SIM the calls or files belong to. They will be saved without any distinctions. The users will be able to access all the files without knowing the difference of SIMs.

This is not a big problem at the moment. All you should know is the app is spying on the target phone with dual SIM. You will get the desired results as well as data. It should not worry anyone if the files belong to SIM 1 or SIM 2. The app will spy on anything and everything according to the features you choose. The text messages will also be tracked with phone calls.

However, users should hope for the best. It is reported BlurSPY will soon introduce a new feature that will be helpful in differentiating between the data files of different SIMs. Like, you will know by name or through distinction which file is from what SIM. It will be a huge upgrade in the future that will resolve this confusion of mixing up the data files.

The benefit of Spying on dual SIM on Android Phone

BlurSPY app makes it easy for its users to track an android phone, whether supporting a single or dual SIM. This is the best thing about the app that it offers the users with the latest features and according to the changing situations. Many users with other apps don’t have this feature. So they are unable to know what the target person is doing on their SIM.

Tracking dual SIM is very helpful when you want to get every update of the activity on the target phone. For example, parents track their children to know about their phone and other activities. Kids can change their message and call option from one SIM to the other. If the dual SIM tracking is not enabled, parents will miss out all those data. They will have no idea what their children have been doing after they changed the SIM.

Another good reason to use dual SIM spying is it doesn’t cost anything additional. The feature comes by default and you will not pay anything for it. So why don’t you just make the good use of a given feature on your app? There are few other reasons too that convince us to use spying on dual SIM option so that we can improve our tracking with the changing trends.

Spying on dual SIM is possible as well as easy with BlurSPY app. There is no much difference between spying on a single and dual SIM. However, when it comes to differentiating data files, users may not be able to know which files belong to which SIM. The update will soon be released.

SnapChat was developed in early 2010 and it became popular in 2012. The basic idea of the app was... read more