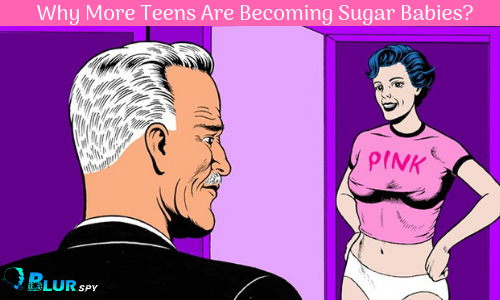 The digital world has connected the people in a quick and smart way. But with this, we are seeing more negative uses of technology and particularly social networking sites. Sugar daddies and mammies are becoming more common in our surroundings. A growing number of college students are becoming sugar babies and they have either a sugar day or sugar mama to look after them, pay their bills as well as fees and even for clothes and food.

This is really an alarming situation for every parent. Most of the parents are not tech-savvy and they have no idea what their kids are up to when they are at the college and schools. The teens feel comfortable with everything. They sell their bodies and make sexual relationships with their sugar daddies and mammies without having any idea what they are doing to themselves.

When it comes to the reasons why teens at colleges become sugar daddies, we have a look into the background. A teenager has no idea of how things work. They have increasing demands in terms of money, clothes, smartphones and even for fun. Parents try to give everything to their children but sometimes kids find it insufficient. They try to look for other options than their parents. Ultimately, they become sugar babies.

Another reason is social media. Various studies have found out that social media leads to a sense of inferiority among teenagers because they compare their life with rich kids. Not everyone lives the same way and has a similar life. This develops a sense of inferiority among the kids and they wish to have better facilities. They are then introduced to sugar daddies and sugar mammies.

The parents-kids’ relationships can be a major reason as well. Many times, kids can’t keep healthy relations with parents. Sometimes, the parents of a kid part their ways with a divorce. All these factors affect the kids badly and they feel inferior. They want to live like other kids of their school. So they become a victim of sugar daddies and mammies in pursuit of life better lives.

The stats are alarming as well as serious. We can’t hold parents responsible for all this but the parents should be careful regarding what their kids are doing inside and outside the house. The teenagers are not careful enough and this is because of their age. They can’t decide what is good or bad for them. They just believe in appearance and the artificial world.

How It Impacts on Teens?

When you become a sugar baby, you lose almost half of the control over your life. A person pays for your fees, bills, clothes and even food and the person expects a lot in return. Apart from sexual relationships, teens become a sort of slaves and prisoners. They can’t live like normal kids. Their life is disturbed and they receive negative effects.

When it comes to the dangers of being a sugar baby, it depends on the person or your sugar daddy and sugar mama. How that person is, defines your life and limits. Many sugar daddies or mamas are rude as well as selfish. What matters to them is their benefits. They use teens for a lot of things. Some teens have lost their lives as well. And the situation is becoming even worse.

What Parents Should Do?

Every parent loves their kids the most and more than anyone else. A sugar daddy or mama can never give the love and support parents give to a kid. Parents should not ignore such things. First, they should keep a check on their kids and do kids monitoring. Seconds, they should communicate and talk to their teen kids if they have any problems in life.

Parents should not feel helpless in such cases. They have to save their kids from the sugar baby word because it is just scary and really harmful. After becoming a sugar baby, a teen loses confidence. Parents should learn about sugar babies and they should know about it. Another thing they can do is to monitor their kids with a parental control app.

How Parents Can Stop This?

There are dozens of parental control apps in the market. The purpose of the teen monitoring apps is to let parents know what their kids do on their smartphones, devices, and gadgets. As we said, most of the teens get to know about sugar daddies and mammas through social sites.

BlurSPY is an amazing cell phone spy app that offers a lot of android spy features. Like, the parents can check what their kids do on their phones, who they talk to, read their messages, listen to their phone calls and even track live locations. These features are really helpful to make parents have complete control over their kids.