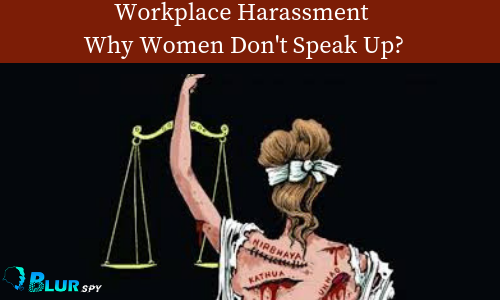 A research done at the University of Missouri-Columbia shows that 98% of organizations have harassment policies at their workplace. Despite this, there has been an increase in harassment cases when it comes to women. Even recently, we have seen many celebrities and big guns speak out about the women harassment with a campaign METOO. However, not all or even majority of the women don’t speak about this.

Reasons Why Women Don’t Speak Up?

They Don’t Want to Seen as Victims or Attention Seekers:

First, the women don’t want to be seen as the victims of sexual or any kind of harassment. They also believe if they speak up about this, people will call them attention seekers. This hurts most of the women and they never talk about it even if they continue to face at the workplace. This seems to be a valid reason. Even when, recently, many women came up with allegations of harassment against celebrities and male actors, people called these women attention seekers.

They Fear Of The Humiliation They Will Face:

A second reason is the fear of humiliation. Our society doesn’t accept what women say and when it is about harassment, people are not ready to support women. They are made silent or told to not speak about it because it will bring humiliation to them. They will also face problems at the workplace when they will level such allegations against their colleagues. They will have to prove all this and it is a time taking process.

The third reason is the time required for follow up. When a woman puts allegations against a co-worker or colleague for harassment, she is required to provide evidence and prove it. This takes a lot of time. The matter goes to the court where she has to hire lawyers or legal assistants to prove her case. All this is hectic as well as expensive so most of the women choose to be silent about harassment.

They Don’t Want to Face the Consequences:

Certainly, there are consequences of every action. When a woman has harassment allegation against a colleague, this is her action. The reaction from other workers and people at the workplace might be dangerous and harmful for her. She will not be supported. Some people may stop talking to her and she will feel alone. Even she might get fired from the job. Many women don’t want to lose their jobs because they have no options or alternatives to their jobs.

No Moral Support from the Colleagues:

This is the last thing that happens to a woman when she speaks up about the harassment at the workplace. Many times, the bosses and managers are not willing to cooperate and favor them. It has also been seen the bosses and managers were involved and how can a woman complain about the boss and who she will? Colleagues and workers in the office might not be supportive. She will be left without moral support and this can hurt her.

Sometimes the Company Culture is a Problem:

A report by Forbes pins down that most of the women who face harassment at the workplace doesn’t want to speak to the bosses and managers because they don’t trust them. In bigger companies, the HR department deals with such matters and the women have no trust in the HR persons. This happens when the culture of an organization is weird and strange. The culture that doesn’t support or accept such allegations is not favorable for women to speak up about these issues.

What to Do Now to Stop Harassment at the Workplace?

Despite the fact many women have spoken up about it, there has been no improvement in this regard. Many directors, editors and managers of media houses and other organizations were fired on harassment cases filed by women and co-workers. Still, we are waiting for the time when women will face really safe and secure at the workplace.

There is a genuine solution to deal with harassers at the workplace. They should be monitored. Employee monitoring is a trend, most of the people at the workplace use their phones, texts, calls or even online messengers to talk to the colleagues. Women said they received text messages showing harassment but now the messages have been deleted. When there is no record, a woman can’t prove her case.

All such women should use a  BlurSPY cell phone tracker to track call logs, messages and other details of the people who are causing problems for them. Even the managers or HR department can use an employee monitoring app to spy on the staff and keep checks on their online and phone activities. This sort of spy app for employee can solve most of such issues and women will feel powerful when they will have proofs against the harassers.